Yes, it's finally time to reveal my latest project.  A few months ago, I picked up a 1954 Chevrolet Bel-Air from Arizona, and took on the arduous job of restoring it.  Here's a picture of what it looked like when I first bought it: 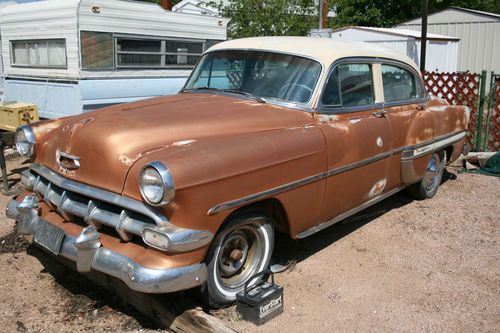 The picture gives it a slightly better look than the naked eye would reveal, but it was a solid car from the start.  Having lived its entire life in the arid Southwest, it was nearly rust-free, which is why I purchased it.  I hate rust, and Maine is the land of rusty cars.  This beauty won't need new floorboards or anything of that nature.  The desert sun did rot some of the plastic components, though.  The tail light lenses, the parking light lenses, and the hood and trunk emblems were either deteriorated or gone entirely.  It was also missing the hood ornament, but overall it was mostly complete.

The first thing I had to do was get it running.  The original 235 engine had had work done to it years ago, but someone had taken the carburetor off to rebuild it at some point and never put it back (and failed to do any rebuilding).  That, and someone snatched the master cylinder out of it, so it didn't have brakes.  These failings were divulged prior to my purchase, so I knew what I was getting into.  The carb was sitting on the front seat, so at least I had it.

To get the engine started, my father supplied an old carburetor he had kicking around, which would suffice until I got a rebuild kit.  With the temporary carburetor in place, we put a fresh 6-volt battery in it and turned the key.  It wouldn't turn at first, and after a quick check we found that the water pump was seized.  We took the belt off, and the engine turned, and started!  Of course, we didn't run it long with the cooling system disconnected (as well as the generator, which runs on the same belt), but it ran for a few minutes, long enough to determine that it really is a good engine.

After the initial run, I started the long process of restoration.  I didn't have a lot of time in September, but I poked around with a few minor things.  I cleaned the trunk, which had about half an inch of desert dust coating it.  Amazingly, there was paint under all that dirt.  A little surface rust was in the spare tire well, but hardly anything to fret about.

After moving it into the garage, the car was jacked up and put on 4 stacks of concrete blocks with 2" wooden spacers between each layer, putting this thing up in the air over 2 feet, so it would be possible to work on it.  One of these days, it would be nice to have a lift, but right now I must make do with what I've got.

Since late October, I've been doing quite a bit of work on this thing.  The carburetor was rebuilt, and a replacement water pump installed.  I replaced the passenger side windows that were busted (both front and rear door, plus the vent window).  I took the passenger side doors off, stripped them down and painted them, cleaned dirt out of the chrome moldings, and reassembled them.  I dismantled the front sheet metal (hood, fenders, grill, splash pans) stripped and repainted them.  Fortunately, we had a very mild November, so I got quite a few pieces done.  The new color I'm using is a metallic teal, which isn't original, but it looks sharp.  The rusty copper color was a repaint, as well, the original color being Turquoise with an India Ivory top.  I'll be putting a Vanilla Cream top on this when I'm done.
﻿﻿ 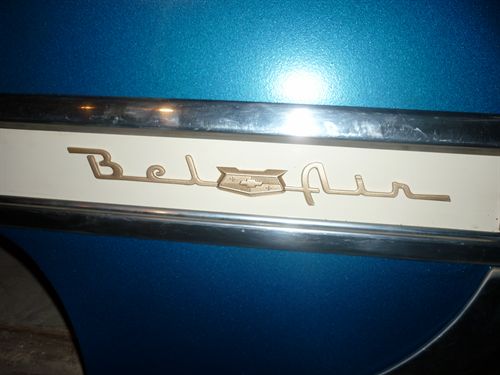 Here's another great thing about the car.  It had factory undercoating, most of which is still in good condition.  There are a few places where it has separated, and as I've been painting pieces I've scraped and sanded the undersides, and then given them a quick coat of paint, but left the solid undercoating in place.  Wherever the loose pieces have come off, I've found glossy black factory paint underneath, so there's no sense in ripping that old stuff off.  It'll protect the car, just as it has for the last 58 years.
﻿﻿
Getting the brakes working was a slow process.  Getting a new, rebuilt master cylinder was the easy part.  Finding the parts to hook it up was another thing.  Whoever snatched the master cylinder out of the car also took the lever that connects the pedal to the cylinder.  Also, the rebuilt MC I bought lacked any of the attaching hardware.  Eventually, I found everything I needed, and got it together.  I bled the brakes, and got 3 wheels to work, but one was stubborn.  I dismantled the wheel cylinder and cleaned it out, but found the real problem to be the brake hose going to that wheel. It was clogged with crud, so I had to blow it out with air.  After that, the brakes worked fine in all 4 wheels.

On Monday, I spent 10 hours putting the front metal back together, hooked up the lights, and got it ready to run.  On Tuesday, I filled the radiator and hooked up a temporary tank for gas (before using the regular tank, I need to drain the old, stale gas out of it).  With the car still on blocks, I cranked it over and the engine fired right up.  It runs like a car should, without any unforeseen trouble.  I'll need to take it out for a short drive to see how everything behaves, but there's not much that can go wrong with this kind of vehicle.  It's all straightforward and reliable.
﻿
﻿﻿
﻿

I still have a lot of work to do on this car, but I have most of the parts either on hand or on order (no cheap feat, I'll tell you).  This winter and next spring, I'll be putting some serious time into the vehicle.  It still needs the driver's side doors painted, as well as the roof and rear fenders.  The car needs a complete interior installed (headliner, carpet, door panels, the works).  As I said, the materials are on order.  Installing the headliner will be an interesting experience, though the factory shop manual shows you how to do it.  I'll just have to be careful.

Once this car is completed, I might just put it on the market.  It won't be a $50,000 show car, but if someone wants to put a little more work into it after me, it could be.  I'd want to get $15k for it.  That way, I'd get my money back and be able to buy another project car.  If that's too much, then I'll keep it and have a really nice Bel-Air of my own to drive around.  Either way, it'll be a good investment.
﻿
﻿
Posted by Martin T. Ingham at 5:22 PM