It has been way too long since I threw together a blog post.  Living life really can take up your time!  Things are good for me, though, so I will not complain.  I hope to have more time to devote to writing and editing in the coming year, but work just keeps piling up.  It's better to be busy than not, I suppose.


First off, I have to apologize to everyone involved with the Forbidden anthology about the further delay in publication.  It is just taking a little longer to put things together for this collection, but it is 100% definitely going to be released in 2019!  I promise.  Once the final proofing and a couple of author rewrites are complete, we will be ready to set the final, concrete release date.  I don't want to throw out another date range yet, because I would hate to miss it again.  But be assured sometime during the first half of 2019.  Unless something disastrous happens, the book will hit the presses before next summer, possibly much earlier.  As soon as we get a firm release date, I will start posting the author interviews here on this blog to promote the book, as has become usual.


So, what else will be coming from Martinus Publishing in 2019?  I have a couple of projects planned, so long as I can allocate the appropriate time.  One thing will be a new short collection from one of my favorite contributing authors (more details once we finish planning things out a bit further).  And after a long wait, I will be setting up another new anthology, something in the Alternate History field again, though this time with a twist.  Without further ado, I hereby announce the next Martinus Publishing anthology:


A new anthology devoted to the humorous side of alternative history fiction.  This collection will hold stories that are funny and outrageous, set in worlds where history differs from what happened in our own reality, with ridiculous consequences.  Tales that could not possibly have happened, or maybe they could have but would have just been absolutely hilarious if they did.  This Never Happened will explore what could have been, and what absolutely could not have been as well.  Make me laugh, and screw up history like never before for this wacky story collection!


You can find submissions details on the Martinus Publishing website here!

Let's see what happens in the new year!

Posted by Martin T. Ingham at 8:51 AM No comments:

Getting Back to It

Well, let's start this off with a look at the final cover version for the forthcoming anthology, Forbidden! 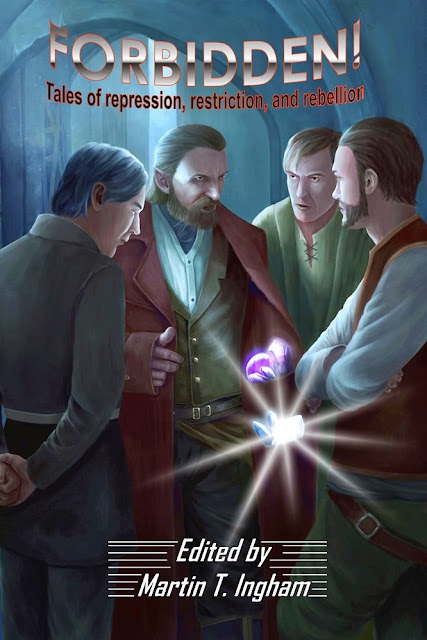 I am pleased to announce that editing and proofing has officially commenced.  I don't have a publication date yet, but it will be coming shortly.  I am hoping for a late summer release.

In my last blog post, I was feeling down, and seeking to reevaluate things in my life.  It is still an ongoing process, but things are moving forward.  This winter, I hope to set up a new anthology, at the very least.  get ready for more information about that as the year goes on.

In the coming weeks, we will begin to run author interviews for the Forbidden anthology.  Many contributors have agreed to the interviews, so you can all get a peek into the minds of these writers.

Knowing When to Rest

The last month has thrown quite a few nasty surprises my way.  First off, I had my desktop computer die, and being lazy and careless, I failed to have some of my more recent files backed up.  Thankfully, I was able to retrieve those files from the hard drive yesterday, but it ended up costing me about a hundred dollars in hardware and software.  Now that the files are recovered, I will finally be able to resume work on the Forbidden Anthology, though there are other issues that make me reluctant to proceed.

This past week threw something even more troubling my way. I received a notice from Amazon, saying that they had received a communication from a Kenneth Romine of the "Veterans of Foreign Wars" organization, saying that the Martinus Publishing book “VFW: Veterans of the Future Wars” violated their "trademark" in some way.  Amazon instantly removed the title, stating that they do not involve themselves in "third party disputes.”

That alone was a shock, but a few hours later I received yet another notice from Amazon, saying that Martinus Publishing had published a "pornographic work," (which title they did not identify) and then they immediately suspended my entire KDP account.

The only thing I can consider being a problem is the cover lettering.  If the Veterans of Foreign Wars owns the "VFW" letters as a trademark, I can understand the legal issues, though I had always assumed that the title of this book was protected as fair use.  I offered to alter the cover to remove the VFW lettering on the book's cover, but Amazon refused to consider it.  They now say the title will remain blocked until the “dispute is resolved by all parties concerned,” which could entail a costly legal battle with the Veterans of Foreign Wars, which I have no money to fight.  It’s kind of ridiculous that an anthology written to honor veterans, many of the stories having been written by actual veterans, would be shut down by an organization set up to also help veterans.  It doesn’t make any sense.

I have been going over everything in my head for the last few days, trying to decide what the best course of action would be.  VFW: Veterans of the Future Wars hasn’t sold anything in the last six months, and in its entire run it only just about broke even, so there’s no real profit to be made at this point in keeping the title in-print.  Though, I find it upsetting that it has to end this way.

To be honest, I’ve felt like giving up this publishing business altogether.  It’s been hard the last couple of years, and this latest nonsense is just leaving a sour taste in my mouth.  I don’t want to stop, but so often it feels like I’m trapped, tied down by the weight of being an editor.  I don’t have the time to write my own material anymore, and I don’t seem to be helping the writers I care about.  Most of the collections I release don’t sell enough to make back their publishing cost, so how does that help anyone?

I still feel obligated to release Forbidden, though I am not sure where I’ll be going from there.  Part of me wants to gear up for another Alternate History anthology, as those are the only things that seem to make Martinus Publishing money, yet that isn’t where my heart is.  It would be just another job, which takes the fun out of it all.  I want to be a writer again.  I don’t know if I can truly do that if I am busy editing other people’s stuff.

At the very least, I think I’ll need a break.  I need a reset on my writing life.  I don’t want to shut down Martinus Publishing, though it may be some time before I’m ready to release another multi-author anthology.  I have stories of my own that need to be told, characters I’ve missed for too many years.  It's time I revisited them, and maybe made some new ones.
Posted by Martin T. Ingham at 5:51 PM No comments:

Last month, I woke up to a minor nightmare.  My desktop computer died.  It wouldn’t have been such a big problem, but I had been lazy and not backed up my latest work documents, in months!  All of the files for the latest anthology I’m working on (Forbidden!) were lost, along with the digital copies of my latest IRS Tax Return, the royalty reports from January for Martinus Publishing, and pretty much anything that happened in 2018.  On top of that, I don’t know where any of my photo back-ups are (it’s like they fell into a black hole or something).  So I seemingly lost almost every single family photo from the past 8 years, as well as the digital scans of many old pictures I’ve painstakingly archived over the years.  Needless to say, I was upset.

I will admit that I am no tech guru.  I muddle through with technology, being clever enough to figure out what I need to learn to make it work.  Yet, when it comes to the finer points of computer sciences, I am not an IT professional.  Unfortunately, I am rather poor, and lack the financial means to pay a real tech guy to fix my problems, hence the muddling through part of my existence.

So, I began by going on ebay and getting a used desktop.  I wasn’t in the position to buy a new one at the time, but I found a refurbished tower that was the same model as the one that had died on me.  It even had a fresh Windows 10 install.  After ordering that, and going over a few tutorials on how to slave a hard drive, I purchased an adapter to do just that.  Then, I waited.

The desktop arrived first, so I got that set up and added what files I had backed up, giving me head start.  Finally, today, the adapter came, and I was finally able to try it out.  Initial connection seemed good, but try as I might, I could not get into my files.  Sure, I could access some of the Windows operating system files, but my pictures and writing were all hidden.  The computer couldn’t detect any of my important files, no matter what I tried.  I was fearful that I had failed, and my laziness may have cost me so many irreplaceable files.

Then I did a little more research, and ran across a software retrieval program at easyus.com.  I downloaded the trial software and gave it a shot.  Lo and behold, my files appeared, waiting to be retrieved.  The only catch was I had to buy the full version of the software.  $73 dollars later, I finally had the program I needed to get my lost files off the corrupted hard drive and onto my new system.

Overall, this was a harrowing experience, one that should never have happened.  I know better than to go any amount of time without backing up my data, as soon as the rest of the files get transferred to my new computer (they are still downloading as I write this), I will be putting everything onto fresh SD cards.  I have a Kingston 128gig card that should fit most of the content, though the pictures will suck up most of it.  I’ll grab a few more once I have the money, and keep several copies of everything, just like I used to.  Really, after all I’ve been through in the past few years, I am finally learning to get back into the habits that I had been accustomed to for so long.  Sometimes, you need a wakeup call to remind you of why you should do certain things.  I’m really glad I was able to retrieve all that I might have lost.
Posted by Martin T. Ingham at 7:44 AM No comments: