It's been a little over a year since a 1954 Chevy Bel-Air rolled into my yard.  Of course, back then it was a derelict, little more than a junkyard special.  It wasn't running, half the glass was broken, and the interior was dreadful.  It was mostly complete, and it had spent its entire life in Arizona, so rust wasn't a big issue.  For the preliminary work on this beast, you can check out last year's post about it.

My initial intent was to have this thing road ready for the spring of 2013.  As these sort of things go, that didn't happen, but I am pretty sure that I can have it on the road in 2014.  There are still quite a few things to do to it, but things are progressing, as you will now see.

Due to various other commitments, I didn't really do much to the car this spring.  Later in the summer, I began picking away at it again, finished giving it a first coat all around, stripped much of the dash and painted that, as well as the entire interior floor.  I reupholstered the seats, put together new door panels, and recovered the door post molding.  I then installed new windlace, which is the round bead that rings the interior of the doors, just in case you're wondering.

Laying the carpet took me half the day, and part of getting that down was trying to cut holes for the pedals.  Of course, to do one of these perfectly, you would want to have the pedals totally removed, and then carve neat little holes to feed the metal rods through.  If I ever get to do a frame-off restoration on one of these, that'll be the way to do it; get the carpet down before anything's in the way.  The other nasty thing I had to do was cut a big hole for the master cylinder access.  Unlike every car made today (or since 1955), the 1954 and earlier Chevrolets had the brake master cylinder under the driver's side floor.  If you want to be able to check your brake fluid, you need to tear up the carpet, or have an access hole.  I ended up carving one out.  Again, in retrospect, I could have been neater about it, and perhaps glued a hunk of carpet onto the access plug to hide it.

With the carpet in, I reinstalled the seats.  That left one major interior project left: the headliner.

Of course, getting to the headliner would have to wait, as it turns out I got quite sick directly after installing the carpet.  When I first started feeling ill, I thought it might be a reaction to the spray adhesive I was using, but it wasn't.  I ended up having 2 different viruses, and one left me unable to do much of anything for over a week.  I'm finally feeling better, so this morning I decided to tackle that headliner.

It was damp when I went out at 8:30AM, and there was the threat of showers all morning.  I took down the old metal bows that are used to hold the headliner into place, and I cleaned them off with a small wire brush.  Bits of the old headliner were still glued to the metal rods, and a little surface rust was present.  I made sure to number the bows with tape, as each one is unique in its placement, even though they look nearly identical.  Once they were removed and cleaned, it started to rain, so I went inside and fed them through their appropriate sleeves in the new headliner.  By the time I had that done, the shower had passed, and I proceeded to set the bows back into place.  It's a time-consuming process to set the cloth just right, and tack it along the windshields (of course, I had the foresight to glue new tack strips above the windshields beforehand, as the original strips had rotted away long ago).  I eventually got the thing into place, and then got around to reinstalling the metal trim that rings the inside of both windshields, and helps to hold the cloth in place.  Then it was a matter of attaching things like the dome light assembly and the sun visor brackets.  By the time it was all over with, it was 4PM, and I hadn't stopped for anything, not even lunch.  But it was done!  Mind you, I could have gotten it smoother, but it didn't turn out too bad.

The interior work has been made easy thanks to my purchase of a complete interior last fall from National Chevy Association.  They've supplied most of the parts for my restoration, and I recommend them for anyone with a 1949-54 Chevy car.  Most of their prices are as cheap as you'll find anywhere, and since they're specialists in these cars you know you'll get the right part.  Of course, a lot of the stuff for these cars hasn't been made in 50 years, so there are times where you have to work with an "almost" right part.  There is a certain amount of fitting and figuring that goes into this, but that's all part of the process. 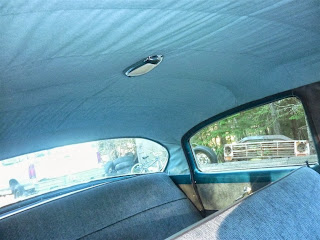 One minor thing that wasn't part of the "complete interior" kit was a pair of triangular panels that sit on either side of the back seat.  The original cardboard panels were rotted out of my car, so I had to fabricate new ones.  To do it right, I ordered some waterproof cardboard, and covered them with the same vinyl material that came with the interior.  I have enough left over cardboard to make a few new door panels, so I may try my hand at making those from scratch sometime.

There are still quite a few things to tackle.  I still have to put the heater back into the car, and then install the new glove box.  I have new kick panels (the little cardboard triangles that go by your feet under the dash), and I have an original radio to put in it, though I don't know if it works (not that you can get much on AM around here).  There are still a few minor mechanical things to do, but for the most part it is good to go.  The only two things it needs that I don't have right now are a front windshield (there is a small crack at the bottom center which is spreading), and an exhaust.  That will all have to wait, as money is an object at this point. 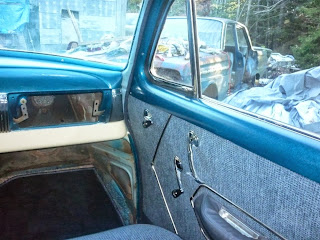 A question of seat-belts:  This is something I'm still pondering.  In 1954, there were no seat belts.  Zero Chevrolet cars came with seat belts in 1954, though some were refitted years later with aftermarket belts.  While it wouldn't look bad with belts, and I personally prefer to have one buckled whenever I'm driving, it wouldn't be truly original if I installed them in this car.  The other thing to consider is that Maine is an original equipment State, meaning if your car didn't originally come equipped with some part, then you do not need to add it.  Even though Maine law requires you to buckle your belt, if you own an antique car that doesn't have them, then you don't have to wear what isn't there.  It may be appealing to some people to have a car that they could legally drive without the restriction of a seat belt, though I'm just not sure if that's for me.  I know I wouldn't be driving the kids around without belts, so this won't be a "family car" if I choose to go the no-belt route.  It would probably stay cleaner that way. 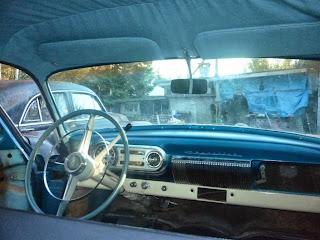 I mentioned last year that I may want to sell this thing when I'm done with it, but that'll all depend.  I don't need to sell it.  That is, I may let it go for the right price, but I won't be chiseled, and if nobody wants to give me what I've actually got in it, I'll just keep it and use it myself.  The only reason I'd want to sell it is because I could then restore another one.  Right now, my "restoration budget" is tied up in this 1954.  If somebody wants a decent driver with a ton of new parts and a complete, new interior, this is the car.  If they want a spotless show car they'd only take out once or twice a year, it isn't.

So, there you have it.  This car has acquired the name of Big Blue—at least, that's what my oldest daughter dubbed it (it's actually teal, but close enough).  It seems like a decent enough name.  It's better than "rust colored piece of crap," which was its name before I got it.  With any luck, Big Blue will be rolling down the road sometime in 2014. 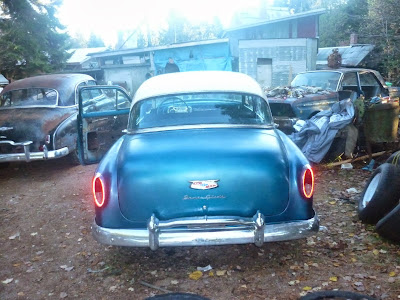 Email ThisBlogThis!Share to TwitterShare to FacebookShare to Pinterest
Labels: 1954 Bel-Air