"To Hell with Dante" is a collection of cynical afterlife stories, ranging from comedic genius to dark surrealism.  To help kick off this fine anthology, I'll be conducting interviews with many of the contributors.  Today I'm interviewing Diane Arrelle, the talented author who contributed the story "Believing for a Reason."  Thank you for being here, Diane. 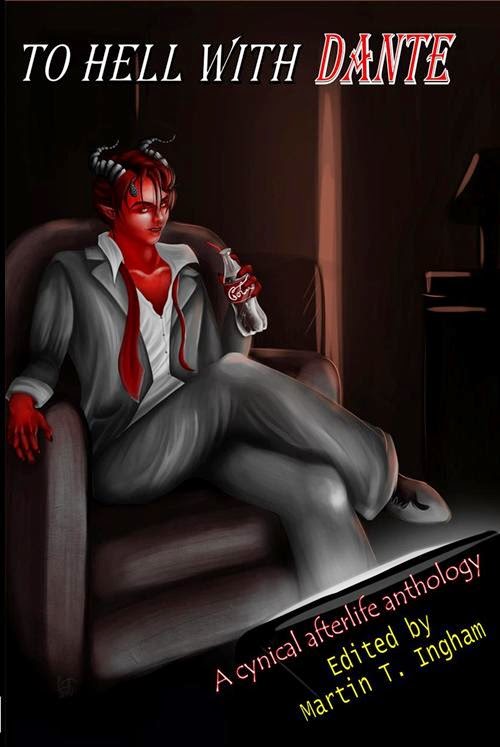 MTI:  I believe we did an interview before, when you contributed to The Temporal Element.  But for readers who missed that interview, why not start off by telling us a little about yourself.

DA: I have been writing for about 25 years. I worked for a newspaper for 2 years then freelanced for the next 15 years. I wrote a humor/family/opinion column for nine years until the newspaper group went out of business.  I loved the column because as the mother of two children, no one ever seemed to care about my opinion at home.
As for fiction, I have had about 200 short stories published and I have 29 of them in my book, Just A Drop In The Cup.  I had a second book, Elements Of The Short Story, published in 2007.
Like many writers, I have had a wide variety of jobs including being an elementary school teacher for 10 years and for the last 15 years I have been the director of municipal senior centers. I just retired two months ago.

MTI:  Your story, Believing for a Reason, appears in To Hell with Dante, tell us a little bit about that.  What's the general idea behind it?

DA: I guess the main idea is that you need to believe in something to move on,  even if that belief is a total rejection of everything we have been told to believe.  It is my rejection of dogma.

MTI:  Does your story hold any special significance, perhaps seeking to provoke some thoughts about the afterlife, or was it just a lot of fun fiction?

DA: Although the story was a lot of fun to write, and the main character such a hopeless narcissist, it really stems from the need to question what we have been told to blindly believe in.

MTI: Okay, on a totally unrelated note, if you could meet and talk with any one deceased person, who would it be?

DA: On a shallow personal note, my Aunt Rose, who passed away at the age of 15 and took some secrets with her.  I think Moses would be a wonderful choice, so much fact and fiction mixed together, I’d love to hear the real version of the Exodus from .

MTI: Shifting back to your writing, can you tell us a little about what you're working on right now?

DA:  I wish I were being more ambitious. I retired to write, but I’ve spent most of the time out with my friends and doing yard work. A lesson here, don’t retire in the fall if you live rural, because you spend most of the time raking.  I am working on several things including a book based on my column, I am planning on putting out a book of short stories on Kindle and I am trying to write stories for several anthologies including one for Temporal Elements II

MTI:  Other than your piece appearing in To Hell with Dante, do you have any other stories being published in the near future?

DA:  I have a story coming out in Sha Daa Facets, my story, The Smart Phone will be appearing in K-Zine in 2015 and my story There Will Always Be Hell To Pay will be in the anthology, Paying The Ferryman in 2015 as well.

MTI:  Your story, "Paradox Lost" appears in The Temporal Element, the very first Martinus Publishing anthology every released.  Do you have any thoughts about that particular story to share with our readers?

DA:  I had a great time writing that story. It was totally tongue in cheek in tone but it came from the time travel paradoxes that nag me when I lay awake at night.  What would happen if you went back in time to murder someone but accidently killed yourself?   Although I get good ideas when I’m wide awake in bed, I’d still rather be sleeping and save those ideas for a different time.

DA:  I love Dr. Who speaking of time travel, I have been watching it since the Tom Baker years. I still watch Saturday Night Live, but mostly out of habit, although I do like the openings and the news.  I watch mostly movies on TV and HBO. Yes, I did watch True Blood, although I usually find trendy horror creatures boring.

DA:  My taste is eclectic and I like so much on the radio today.  I love the sound track from Pirate Radio when I’m in the 60’s sort of mood and Pitch Perfect for a mix of music. Being that it is November, I am getting ready to listen to the Trans Siberian Orchestra. I an taking a road trip with my husband on Black Friday to see them perform in .

MTI:  What are three of your favorite movies?  You know, the ones that never get old.

DA:  Field Of Dreams, that one always makes me cry at the end.  I love Shrek, the original The Producers and Secondhand Lions (ok so I picked 4).

MTI:  Of course, writers are some of the most voracious readers these days.  Tell me, have you run across any great pieces of literature lately?

MTI:  You have the attention of potential readers.  Do you have any words of wisdom to share with them, or possibly a sales pitch to encourage them to read more of your writing?

DA:  I write under a pen name, Diane Arrelle, so be sure to look for me under it. I have the upcoming stories  mentioned above and I have a story in State Of Horror New Jersey, a few stories currently in Were Travele, and my story A Woman Sporned in Paranormal Horror II.  I also have a piece in Chicken Soup For The Soul True Love and one in Finding your Happiness, both of those under my real name Dina Leacock.

MTI:  Of course, readers love free samples, so let's give them a taste.  Here are the first few paragraphs of your story, as featured in To Hell with Dante:

Matilda Davis knew she was going to die.  One minute she was driving too fast on an icy bridge and the next... well, the next was a series of images, crashing through the guardrail, the car landing on its roof with a bone snapping crack, and then the awareness of nothingness.

Puzzling feeling... nothingness... “Am I dead?”
Laughter by many and a lone voice saying, “Give the woman a chance to acclimate.”
“Hello?” Matilda called.
“Hello,” a voice answered.
“Are you... are you God?”
The giggles started again.
“Cut it out,” the voice called to the unseen crowd and then to Matilda,  ”Do you want me to be your god?”
Matilda felt a wash of confusion. “My god?  I... I don’t have a personal god. Is this heaven?  Is this some sort of test to get in?  Why are people laughing at me?” Matilda was starting to feel emotions again and annoyance crept into her voice. “And what’s with all this nothing. Why can’t I see anything? Where are you people?”
The voice asked, “Do you have a god?”
“Hey, look, whoever you are. I don’t have time for this mystical crap. Just answer my questions.”
“Ah,” the voice sighed. “An angry soul.”

MTI:  Thanks for another great interview.  Those who want to read the rest of this story and 20 others can pick up To Hell with Dante.

Email ThisBlogThis!Share to TwitterShare to FacebookShare to Pinterest
Labels: interview, To Hell With Dante