Hello, and welcome to our latest series of author interviews.  The long anticipated anthology "Altered Europa" will be coming April 2, 2017 (ORDER YOUR COPYHERE), and in preparation for this grand release we'll be running interviews of various contributors. 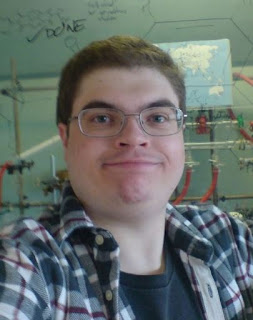 TOM ANDERSON:  I’m a chemist by trade, having studied at the University of Cambridge, and I now lecture in Chemistry at the University of Sheffield not far from where I was born in Doncaster. I’ve always been an avid reader and I also play the electric organ. I enjoy travel, particularly to North America.

MTI:  Now, the next question I generally ask new contributors is this; what first compelled you to weave fiction, and what's your favorite type of story to write?

TA:  I started probably the way many people do, enjoying stories written by others, acting them out in my head and then taking them to new places. As a scientist it’s perhaps unsurprisingly that I like science fiction and fantasy, and similarly my interest in history led me to alternate history.

TA:  J. R. R. Tolkien will always be the gold standard to me, particularly when it comes to worldbuilding (an idea he essentially coined although he called it ‘sub-creation’).

MTI:  Your story, A.E.I.O.U., appears in Altered Europa, an anthology devoted to alternate history and altered reality.  Tell us a little bit more about this contribution, particularly, how does it deviate from known history?

TA:  Real history often seems like it took the most unlikely outcome, and the Seven Years’ War of the eighteenth century is no exception—Frederick the Great of Prussia managed to defy the odds and fight off both Austria and Russia at once, even when at one point he so despaired that he almost virtually committed suicide on the battlefield, and was ultimately saved when the Empress of Russia conveniently died at the right minute. A. E. I. O. U. explores what might have happened if the duller (but rather more plausible!) outcome had taken place with the defeat of Frederick and Prussia and the continued success of the Hapsburgs of Austria.

MTI:  Tell us a little bit about your other contribution, N'oublions Jamais.  What's the premise behind it?

TA:  Without giving away too much of the plot twists, N’oublions Jamais was inspired by the fact that the European alliance system in the years leading up to World War I switched around so much that a very recognisably similar war could have taken place with a rather different lineup of allies…

MTI:  How much fun is it writing a story with Bruno Lombardi?  How did your collaboration come about?

TA:  I’ve known Bruno for some years and we’ve collaborated on other projects before. It’s not surprising he became a writer when his everyday life is more far-fetched than any fiction could ever be. I once met him on a railway in the Canadian Rockies four thousand miles from where I live and two thousand from where he lives, for no reason. Crazy (but awesome) guy.

TA:  Selfishly I wouldn’t because the butterfly effect would probably get rid of everyone I’ve ever known and most of the media I enjoy (we joke that a friend who writes pop-culture alternate history gets more flak from readers for averting the creation of TV shows people like than other AH writers do for nuking China or something). As a purely intellectual exercise, I always think a world without the American Revolution would be perhaps the most fascinating possibility.

MTI: On that note, "The Two Georges" by Turtledove and Dreyfuss comes to mind.  I also have a rough story about an American Indian who goes back in time and kills George Washington which alters the outcome of the Revolution, though that is nowhere near ready for publication.  Further still is Owen Morgan’s story “The Loyalist Washington” from Altered Europa.  The American Revolution certainly is a popular point of divergence for alternate history!

For further pondering, if a wormhole leading to an alternate reality suddenly appeared in front of you, would you dare to take the plunge and discover what awaits on the other side?

TA:  Probably not for the reason given above, though I’d certainly like to send a probe through like in Stargate.

MTI:  Yes, a MALP would make exploring so much safer.  Shifting back to your writing, can you tell us a little about what you're working on right now?

TA:  My current project is called ‘The Twilight’s Last Gleaming’ and, without giving too much away, it can be summarised as ‘Deep Impact if it had happened in Victorian times’. What does the response to a global disaster look like in the 1880s?

MTI:  Other than your work appearing in Altered Europa, do you have any other stories being published in the near future?

TA:  A number of my stories have been published and are upcoming published by Sea Lion Press, which was co-founded by two good friends of mine and fellow writers. My largest project, Look to the West, currently has two volumes published there (out of five and growing…) which describes the very different world arising from the Prince of Wales being exiled to America in 1727.

TA:  At the moment I’m mostly into the growing stable of DC Comics TV adaptations, it’s interesting to see how they develop themes and crossovers, and of course especially the use of a multiverse with multiple parallel dimensions.

TA:  I have eclectic tastes that mostly stop in the 1980s. One good thing about the ‘Youtube generation’ is that it’s no longer considered so odd for people to be fans of music that was released before they were born.

TA:  A Night at the Opera, Guardians of the Galaxy and Star Trek: First Contact. I tend to think humour is better for repeat viewings than action alone.

TA:  Here follows below a short excerpt from The Twilight’s Last Gleaming.

Three cowboys trotted their horses southbound, wrapped up against the chill spring weather of northern Dakota. Well, two cowboys—their names were Bill Sewall and Wilmot Dow—and another guy. This fellow could quite accurately be described as ‘a bespectacled asthmatic from Manhattan who enjoyed collecting butterflies and had a copy of Anna Karenina, in French, in his pocket’. In the same way that Manhattan could quite accurately be described as ‘a small island that last changed hands for twenty-four dollars’.

The gentleman in question was chuckling to himself. “It’ll be a tale for years to come, no doubt about it. Around campfires of the west, or the hearth in a townhouse, even the State Capitol in Albany—I’ll never tire of this one.” His moustache wagged. “And don’t think I’ll ever leave out your part, gentleman! I can’t if I wanted to!” He laughed and patted a pocket. “Photographic evidence!”

Bill and Wilmot exchanged looks. At times like this, it was best to let the boss run on. He wouldn’t really hear anything they said in response anyhow. Not that they didn’t respect him. It was hard not to respect a man who responded to being called ‘four-eyes’ in a Western bar by beating the hell out of some dude twice his size.

“Think they’ll steal our boat, will they—Finnigan and his cronies?” the boss said, as though planning out a chapter in his memoirs. “Well by hook or by crook you boys damn’ well build a new one inside of three days and we’re after the bandits! They didn’t expect that!” He chortled. “Up the frozen river! Through the Badlands, past those Gros-ventre teepees! Steal on them when they least expect!” He mimed holding a rifle. “You took our boat, we’ll take your LIVES! Or at least your freedom,” he said, realised he was getting carried away. “Hands up! Boots off! You won’t get far in cactus country without ’em, my good sir! And off to Bismarck jail with you!”

“It was a good piece of work,” Bill ventured. It had also been several weeks ago, he didn’t add.

He was interrupted by his horse rearing and neighing. Though he had come to horsemanship long after most of the men of the west, he managed to get it under control, as did Bill and Wilmot. “Steady! Steady there! What are you—”

Then they felt it too. It was the same sense of vague but definite dread by which animals seemed to predict thunderstorms and earthquakes, but so strong this time that even humans could dimly grasp it.

It was not for quite a while till they had any sense of what it was. But then the sound of a loud explosion echoed distantly across the flat landscape of the Plains, lacking much in the way of mountains or other raised features to reflect and confuse it. It was not a bang or a boom: it went on too long and was too complex to be dismissed with those examples of onomatopoeia. The boss, because he was the boss, discussed this excitedly with Bill and Wilmot and eventually concluded it had been more of a “BRAKAKAKAKOOOOOOOOOOOOM”. The spelling with twelve Os won a tiebreaker coin toss against thirteen Os.

“But dammit, men, we have to find out what it was!” the boss said finally. He pointed vaguely to the west. “It was definitely in that direction, I’d swear by it, when a man hears an explosion he should run towards it...”

Bill coughed. “Yes, but we’re low on supplies. And we have our wives and families at Elkhorn, remember.”

The moustache slumped. “Yes of course you’re right,” he theatrically slapped the back of his head, “what am I to forget your loved ones? A plain pig! Come on then—back to the ranch, we’ll see everyone is plumb fine, and then, and then...” He rubbed his hands together, “let’s see about assembling a little expedition.”

MTI:  I am suitably intrigued by this sample!  Thank you for an excellent interview.  Those who wish to read more of Tom Anderson’s excellent writing can check out Altered Europa! 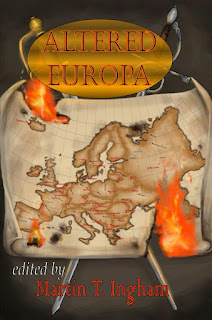