Here we are, coming up on America’s Independence Day, and I’m taking a little time to get some Editing work done.  There are two upcoming projects I’d like to mention, for readers and writers alike.

First off, for the first time in over two years, Martinus Publishing is open to submissions for an anthology.  Forbidden!  will be taking subs from now until the end of December, focusing on stories that revolve around something that is “Forbidden.”  I’m hoping to see a good mix of stories for this one, and stories that explore the theme less traditionally.  I’d like to see some stories that focus on fairly innocuous or commonplace things being forbidden or banned in the past or future, and avoid a lot of clichéd rehashes of drug or sex stories.   Imagine a world where sugar is illegal, or a time in the past where someone rebelled by wearing purple (when only royalty were allowed to).  Think outside the box a little, and let your fingers do the talking on your keyboard!  For more guidelines, check out the MP submissions page here.

The other project in the works is the third installment in our “Author Spotlight” series, which gives selected solo writers the chance to showcase their best (and some of my favorite) stories.  This time, the honor goes to Bruno Lombardi, and his 8-story collection is currently being formatted.  This series is planned as an ebook special, so get your Kindles fired up for this!  We’ll have a dedicated post for this collection when we get closer to the release date.  Look for this one toward the beginning of August. 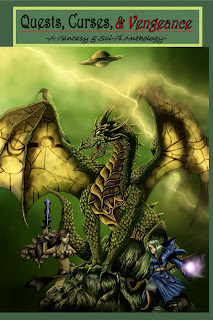 So, as I have been settling into my Editor’s life again, I have taken a few brief moments to glance over some of my old projects, and recall the fire that propelled me into this life I’m living.  As I looked back at several of the previously published anthologies that I’ve worked on over the years, I came across what is possibly my fondest and most disappointing release; Quests, Curses, and Vengeance.  This fat collection of stories came out when Martinus Publishing was in its early stages, and I am eternally saddened that it did not spark much interest from the reading community.  It was by far the largest book MP has released to date, and it was by far one of my favorites.  This was the product of a writing shootout, with stories derived from a single contest.  I had the most fun reading and editing these stories, more than I’ve ever had before or since.  I had the pleasure of working with some of the best writers I’ve ever known.

In my bit of nostalgia, I looked over the list of stories and authors, and I realize how much I miss the feeling I had back then.  It was all so new, and refreshing.  So many of those writers I haven’t heard from in years, and some aren’t even with us anymore (RIP Nye).  I wish this book had gotten greater attention, but as is the case with most of the things I like the most, few others appreciate them.

There are times I miss those days, but only certain parts.  The stories and the writers who crafted them were truly a highlight of those years, which are not so far behind.  I hope the future will bring me back to that feeling, and beyond.
Posted by Martin T. Ingham at 6:13 PM